The reason you haven’t felt it is because it doesn’t exist. What you call love was invented by guys like me to sell nylons. – Don Draper

On “Mad Men”, Don Draper is the embodiment of confidence. He is the master of the main goal of advertising – making the public believe they simply cannot live without what he is selling. Advertising, at it’s best, points out what the audience needs. The right advertisement can make you think buying a bar of soap will change your life. What Don Draper does on “Mad Men” every week is nothing new. In fact, the principles of advertising can be traced all the way back to the Bible. In Luke 23, we learn about what might be the world’s first advertisement. As Jesus was crucified, a sign was nailed on top of him. The sign would have looked something like this: 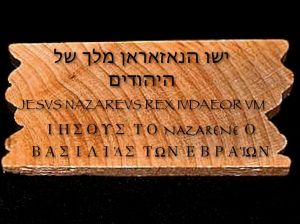 It read “KING OF THE JEWS” in 3 different languages- Hebrew, Greek, and Latin. The sign was hoisted up in sarcasm by the king’s men who crucified Jesus. Still, the message was clear to all who were around. The sign spoke to something in the men and women who passed by Jesus that day. As any good advertisement does the sign pointed to something the audience needed, even if that was not the original intentions. The advertising spoke most prominently to the men hanging next to Jesus. Two thieves were crucified next to Jesus. Their deaths were looming, but the sign above Jesus forever changed their lives. One man saw the sign and rolled his eyes. He scoffed at the notion this man hanging next to them could be the Savior. The other man saw the sign, saw Jesus, and saw what his life needed. He went out on a limb as he was hanging on another limb. He humbly asked Jesus to remember him in the next life. For this thief to have faith in this man who claimed to be God was crazy. Despite all the evidence the sign above His head embodied, following Jesus was still a bold leap of faith. Both men hanging next to Jesus died that day. Their death sentence was unavoidable. But for the man who was bold enough to ask Jesus to remember him, his life was only just beginning. In his dying moments he found the peace he had searched for his entire life. He found the acceptance and the love we are all after. He learned death is not the end. Unlike what the characters of “Mad Men” sell in their advertisements, the words above Jesus were not a marketing ploy. They were real and true. Jesus is the King of all. He alone offers life in abundance. Unlike the man on the cross next to Jesus, you have your whole life ahead of you as you ask Jesus to remember you. You may look mad by giving your life away. But surrendering your life is the only way to gain it. You have the chance to climb down from your cross today. Do not delay.

3 thoughts on “Truth In Advertising”