(It’s WrestleWeek on POP GOD! In celebration of WrestleMania 32 this Sunday we’ll be looking at the intersection of faith and wrestling. You don’t have to be a fan to hop in the ring on this journey. Read on to see how this fake sport provides real lessons for anyone who’s ever grappled with God.)

What do these wrestlers all have in common?

And none of them were ever World Champion.  END_OF_DOCUMENT_TOKEN_TO_BE_REPLACED 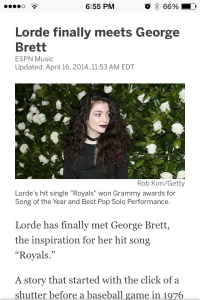 Yep. That’s international recording star Lorde and baseball Hall of Famer George Brett. Of all the people in the world to meet yesterday, they did too.

Here’s where it gets really weird. Apparently Lorde was inspired to write her smash hit song “Royals” because she saw a picture of George Brett in his Kansas City Royals uniform signing autographs to kids. So she wrote her song about fame and success and culled the idea of Royals from Brett’s jersey.

I’m not kidding. Apparently this is all true.

There is no possible way George Brett could have known back in 1979 the just by doing his day job of playing baseball that he would one day inspire a 17-year-old from New Zealand to write the hit song that would make her famous. But it happened.

The Ultimate Warrior is finally going into the WWE Hall Of Fame this year.

The Warrior is a bit of a controversial candidate for induction. He certainly was not an outstanding in-ring performer.

But there’s a reason why The Ultimate Warrior is remembered so fondly by a certain generation of wrestling fans.

The Ultimate Warrior dared to be different.

While other wrestlers wore plain tights and boring boots to the ring, The Ultimate Warrior wore wacky tassels and neon colors and flashy face paint.

While other wrestlers walked slowly to the ring, The Ultimate Warrior rushed down the ramp like a wild animal unleashed.

I’ve never had the chance to be disappointed by a Bruce Springsteen album.

As a relatively new Springsteen obsessive – I’ve only been on board this train for about 5 years – I still feel privileged for any new E Street release in my lifetime.

After all, the wrecking ball will find it’s mark at one point or another on every life. Even Bruce Springsteen will succumb to time. So I’m usually giddy with any news of new Springsteen music.

So, as Bruce’s latest album High Hopes is released worldwide today, why am I so underwhelmed? END_OF_DOCUMENT_TOKEN_TO_BE_REPLACED

40 years ago this week, Bruce Springsteen dropped his second album, The Wild, The Innocent, and The E Street Shuffle, a personal favorite of mine.

The record would go on to become one of Rolling Stone‘s 500 Greatest Albums of All Time and help establish the career of a first ballot Rock and Roll Hall of Famer.

But nobody knew that 40 years ago. END_OF_DOCUMENT_TOKEN_TO_BE_REPLACED

The week is half over.

What will you do in the second half?

Whatever you’re doing, don’t give up. Wednesdays can be the longest day of the week. But press on. You’re halfway there. Keep fighting.

Follow the lead of Forrest Griffin and Stephan Bonnar.

END_OF_DOCUMENT_TOKEN_TO_BE_REPLACED

(It’s Wrestlemania week on POP GOD! Join us everyday this week as we count down to Wrestlemania XXIX this Sunday with new posts searching for God in the squared circle.)

20 years – the length of time the WWE Hall Of Fame has existed and ignored Bruno Sammartino’s unmatched accomplishments. 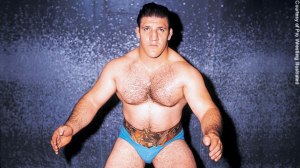 At this year’s WWE Hall Of Fame ceremony, one of the great injustices of professional wrestling will finally be righted. After over two decades of feuding and  refusing to appear, “The Living Legend” Bruno Sammartino will take his rightful spot in the WWE Hall Of Fame.

This is a momentous occasion for wrestling history. Sammartino has been at odds with WWE Chairman Vince McMahon since the 80s over the way McMahon commercialized and sexed up the wrestling industry. But the WWE’s new PG attitude seems to have bridged the gap between the two sides.

WWE is finally recognizing Sammartino’s incredible contributions to sports entertainment. A new generation of fans who never heard of his legend will get to see Sammartino’s accomplishments on TV, DVDs, and the internet.

To many pundits Bruno’s career, and his legend, will not be set in stone until he is granted his gold ring. This despite the fact that people like Koko B. Ware are already enshrined. (Also, so is Drew Carey. What?)

Does Bruno Sammartino need the Hall Of Fame? Would his legend die out without it? END_OF_DOCUMENT_TOKEN_TO_BE_REPLACED