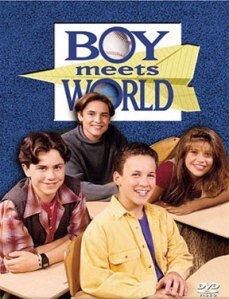 If you grew up in the 90s, you’ll always remember where you were when you heard the news.

The greatest news in the history of television:

“Boy Meets World” was coming back.

Well, sort of. The Disney Channel is mounting a sequel/spin-off series to the original TGIF classic called “Girl Meets World” following the adventures of Corey and Topanga’s tween-aged daughter. Fans immediately began to wonder if any of the original actors would return – Ben Savage and Daneille Fishel and William Daniels, the man who shaped the minds of so many preteens in the 90s as Mr. Feeny. And of course they all will be back in one role or another because everything about this is just perfect.

No one was expecting this. Who could have? The news came out of nowhere and nearly broke the internet. People didn’t realize just how much we wanted to see our favorite star-crossed high school lovers back on television.

It almost feels greedy to want something so awesome to happen. When a classic show gets cancelled abruptly (say Arrested Development), fans begin carrying the flag for the show full force. Protests are held, petitions are signed, people clamor for the show’s return.

“Boy Meets World” has never been a show people have clamored for more of. It was not cut off abruptly. It ran for 7 seasons and 156 episodes and had a memorable series finale that wrapped up the series as neatly as you could imagine.

If the story of “Boy Meets World” truly ended back in the year 2000, it would have been a great story by itself.

But what if that wasn’t the end? What if it could come back, and continue the greatness for a whole new generation?

That had to be what the disciples were thinking in a world without Jesus.

When Jesus left them hanging for 3 days after his death, his followers were upset and heartbroken. They had just witnessed something special in the life of Jesus, and they knew it, but they were hoping for something more.

If the story of Jesus Christ ended with his death on the cross, with four gospels and 30-odd years full of wisdom and miracles and love left behind Him, the story would go down in history as one of the greatest of all time. Jesus Christ would still be looked up to as a hero and prophet and man among men.

They were right. The cross was not the end of Jesus’s story. Jesus came back.

The cross dominates so much imagery of the church, but it’s really not Jesus’s death which makes his story so special. It’s his comeback. The fact that he walked and talked on the earth again, fully alive after a horrible death. The cross is nothing without the crown Jesus wore after His comeback.

Jesus did not just die for us. He overcame death for us. He added the greatest postlude of all time to the story of mankind.

“Boy Meets World”? Now that was a great story. What’s even greater is that somehow we will get more of it.

Each day you get more of Jesus’s story as well. The story has lived on ever since He rose again that Easter morning.

If you feel stuck, if you’re wondering if there’s something more to your story, hang on. Your story is not over yet either.

Jesus is not done working in your life. He rises again every day in the hearts of believers.

Hang on. Your comeback may be just around the corner.

What’s the greatest comeback you have ever seen? What’s your favorite Boy Meets World memory? Where do you need Jesus to make a comeback in your life? Leave a comment below and join the conversation:

2 thoughts on “The Art Of The Comeback”