Whereas it seemed a few years ago that every horror movie wanted to focus on vampires in the shadow of “Twilight”, now we’re being bombarded with zombie movies and tv shows in the wake of “The Walking Dead”. Chances are this Halloween as you’re counting up your candy you’ll be watching some sort of zombie-tainment. 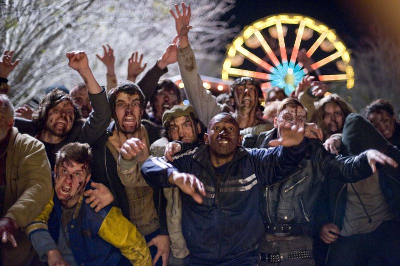 Every form of zombie-tainment follows a pretty simple formula: some sort of infestation has devastated the world’s population. The infected become some sort of half-dead lumbering creatures whose sole mission is to feast on human flesh and brains in order to survive. Those who are still living do their best to run and survive.

That’s all well and good if you want to have a hit in Hollywood right now. Just cut and paste that synopsis, toss in some sort of romantic plot amongst the group of survivors, and boom – you’ll be $100 million richer in no time.

There is, however, a way you can ruin the seemingly foolproof formula of a zombie movie: instead of attacking others, have the zombies start serving others.

Sound crazy? Of course it does. But it’s not unheard of.

One time Jesus brought a woman back from the brink of death. And the first thing she did was start serving others.

Now Simon’s mother-in-law was ill with a high fever, and they appealed to Jesus on her behalf. And He stood over her and rebuked the fever, and it left her, and immediately she rose and began to serve them. (Luke 4:38-39)

This story wouldn’t work for a horror movie. You see Simon’s mother-in-law didn’t wake up from her infection and start attacking others. She didn’t even rise from her deathbed concerned with her own health and well-being.

The first thing Simon’s mother-in-law did when she awoke from her near-death experience was to get to work serving those around her.

This woman had we all dream of – a second chance at life. She could have done anything first. She could have gone to her favorite restaurant or seen a close friend. We wouldn’t have faulted her.

Instead she chose to serve.

If you really think about it we get the same opportunity as Simon’s mother-in-law every morning.

Every time we wake up we are being blessed with a new lease on life – an opportunity to stop wasting time and get to work serving others.

Instead the first thing most of us do when we wake up is look at our cell phone.

I’ve written on this blog before about avoiding the Mindless Morning Scroll. But that doesn’t mean I always put my advice into practice. Some mornings the temptation is just too strong to start the day scrolling through social media.

Lately the first place I’ve been going is the Podcast app. I’ve got a steady diet of podcasts I’ve been subscribing to that help me get through the work day. Each morning it’s the first button I tap on my phone to see what guests will be talking in my ears that day (and to make sure the latest episodes of What Would Jesus Watch? and the Pop God Popcast have downloaded).

What if, instead of worrying about what type of media I was going to consume that day, instead I woke up wondering about the ways I could serve people today? What if I woke up and got right to work serving my wife, my coworkers, the people I pass by on the streets of downtown Atlanta? What if we all did?

A person waking up from the dead and deciding to help others instead of themselves – worrying about who they could serve instead of what they could consume – wouldn’t make for a very scary horror movie. But it would make an incredible plot for our lives to follow.

What would be the first thing you did if you woke up from the dead? If you saw each new morning as a second chance at life, as a reawakening of your spirit, would it change the way you approached your day?