Who knew watching celebrities lip sync popular songs could be so entertaining?

There’s no denying watching Tom Cruise and Jimmy Fallon serenade an audience member on “The Tonight Show” with “You’ve Lost That Loving Feeling” is hilarious. Watching other famous folks dance and pretend to be pop stars is what’s made the spin-off series “Lip Sync Battle” the surprise TV hit of the year.

“Lip Sync Battle” works because it’s fake. We obviously know The Rock doesn’t sound like Taylor Swift. Seeing him pretend to is so ridiculously over-the-top fake – which is what makes it so funny and fun to watch.

Anyone can lip sync their way through a song. It’s entertaining enough at first. In the end though it doesn’t actually accomplish anything. 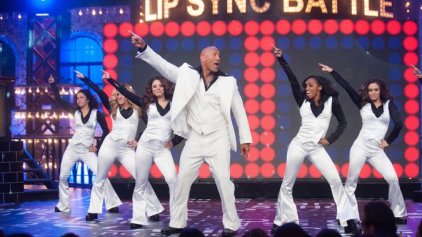 Have you felt yourself lip syncing your way through a worship service?

It’s easy to sit in church and mouth along to the music. Some Sundays it’s all we can do to just show up. Instead of truly singing out we lip sync along with the choir.

We recite the words to the Lord’s Prayer, pass the offering plate and take communion without even considering what we’re doing.

That’s not what our faith is supposed to be. Yet we face a true battle everyday to not lip sync our way through our relationship with God.

It doesn’t have to be this way. Because if you really think about it anyone can sing. Everyone has voice.

Some voices do sound better than others. My wife for instance has an incredible classical voice. She’s studying to earn her degree in vocal performance in fact. She understands music on a level most of us never will.

My wife truly loves to sing and God has blessed her with an incredible ability to do so.

I think because there are so many incredibly talented singers out there that a lot of us are scared to sing in front of them.

As the wise teacher Buddy The Elf told us, you can just do it – whoever you are, wherever you are in life. We’re basically born with a song on our lips.

You see, my voice doesn’t sound anything like my wife’s. But I love to sing too.

Whether it’s belting out the words at a Bruce Springsteen concert or driving down the road singing along to Counting Crows with the windows down, I often sing until my voice wears out.

Now, the only way I could ever get the judges on “The Voice” turn their chairs around would be because they thought someone was dying on the stage. Yet I sing all the time because it feels good and it fills my soul.

While it’s fun for a little while to lip sync along with someone else’s song, true joy comes with singing with your own voice – no matter what it may sound like.

I think the same is true when it comes to our relationship with God.

To get better at singing you have to…well…start singing at some point. That’s how we learn to use our voice. It may not sound good at first. You may mess the words up. But you’ll never find your voice if you never open up your mouth.

Here’s a tip though – especially if you’ve been lip syncing your way through your faith for a while. Sometimes though the first step to finding your voice is becoming silent.

Instead of just moving your mouth to the words and going through the motions at a church service, sit back and listen. Take a week off from taking communion to really ponder the actions of what you’re doing. Listen to the words of the prayer of confession before just reciting it to see if you truly mean them.

Wherever you are though it’s time to stop lip syncing. Sure, you can do it for a little while and get away with it. It can even be quite fun pretending to be something you’re not in front of a crowd roaring with approval.

Over time those cheers will fade. What the world truly craves is your original voice. The choir is not complete without it.

The world needs you to add your voice to the chorus. Stop worrying about hitting all the notes perfectly and just start singing.