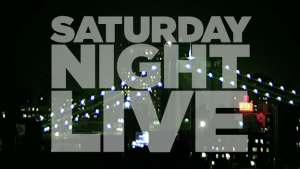 For 40 years, those 7 words have been uttered from studio 8H in Rockefeller Center announcing the most exciting 90 minutes of television comedy every week.

The most important of those 7 words is the first one – Live.

“Saturday Night Live”, despite what you may think, airs LIVE. It does not air on tape delay. It does not air 3 months after it was recorded. New episodes air live at 11:30 pm Eastern Standard Time Saturday nights.

There’s no getting around this. If the sketches aren’t ready or the actors aren’t prepared the show cannot be postponed. There’s a contract with the network and with the viewers. The show must go on no matter what.

This could easily be intimidating, especially considering the prep for most episodes takes place over just 6 days.

It also includes making fun promos during the week, like these from the Melissa McCarthy episode a few weeks ago:

(Click Here if you can’t see the video above)

When these promo videos come out every Wednesday, the reality sets in. In just a few days it’s time to go live before the world.

Really though, I think it’s pretty freeing to know that at a certain point you just have to go live.

The greatest fear any artist faces is publishing their work. Ideas are all well and good as they sit inside your head, inside your journal, or on your computer screen. But once you hit the “Publish” button, everything changes.

Unfortunately most people let the fear of going live overcome them. They stop short from ever sharing their work with the world.

In his book Journal Of A Novel John Steinbeck traces the creation of his classic work East Of Eden. As he writes in the first chapter:

Maybe I can finally write this book. All the experiment is over now. I either write the book or I do not. There can be no excuses.

I love this wisdom. You don’t have to be an artist to follow this line of thinking.

It won’t be perfect. But the pursuit of perfection will prevent you from ever realizing your dreams.

Perfection is an illusion. Stop being fooled by the magicians in your head trying to convince you it’s real.

When SNL goes live this Saturday, everything won’t be ready. It may look like a well-oiled machine on your television, but there will have been problems behind the scenes. Someone will mess up their lines. A set piece won’t look the way it was originally envisioned. No show created within 6 days can ever be perfect.

But the show goes on. Some of the greatest comedic works of the past 40 years have come from imperfect sketches which graced that famous stage.

If they decided one Saturday at 11:29 they couldn’t go on the air because they weren’t ready, can you imagine the genius we may have missed out on?

What is the world missing out on because you’re afraid to go live?