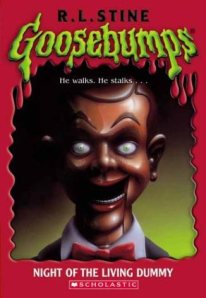 Who didn’t love Goosebumps as a kid?

If grew up in the 90s, there were 3 things that were always in your bookbag: an emergency supply of Gushers, one of those different color eraser pen things, and the latest ‘Bumps book. (Did people call them ‘Bumps? They totally should have.)

One man was responsible for revolutionary children’s horror anthology. Say his name with me:

R.L. Stine churned out 62 Goosebumps books between 1992 and 1997 – an average of over 10 books per year! That’s not including the 50 Give Yourself Goosebumps create-your-own-adventure style books, plus 74 episodes of the television series based on the books, plus the Fear Street series he published at the same time aimed at teenagers.

But this blog is not about R.L. Stine the Goosebumps author.

Last week I read an interview on The A.V. Club with Stine. The interview focused on another aspect of his career.

What I learned in the interview completely redefined my childhood. Before a page of Goosebumps was ever written R.L. Stine worked on another landmark project:

I’ll wait here while you collect the fragments of your brain off the keyboard.

Finding out Stine created “Eureeka’s Castle” was a revelation to me. Not only did this one man create one of the most influential series of books of the 90s, he also created one of the greatest children’s television shows of all time.

Turns out R.L. Stine didn’t stop there. He also edited the original run of Nickelodeon Magazine, which I and every other respectable child in my school had a subscription to.

This is just getting ridiculous now.

Wouldn’t it have been enough for R.L. Stine to just write the Goosebumps series? He did something most authors never do – create a work that connects with an audience. Absolutely no one would have faulted Stine for devoting his life to the Goosebumps gold mine.

But think about this: if Stine had just devoted himself to Goosebumps, the world would have been robbed of the genius of “Eureeka’s Castle”. Millions of kids would have never held a copy of Nickelodeon Magazine in their hands.

You see, no one will ever fault you for finding your niche and sticking to it. Most people would be lucky to find one thing they are great at it and stick to it.

In fact, most people will encourage you to find one thing you do well and keep doing that the rest of your life.

The people who truly impact the world are the ones who don’t settle with being good at just one thing. Don’t be afraid to try something new today. You could bring your unique gifts to a brand new creation.

R.L. Stine probably tried a lot of things he was terrible at. There are probably countless drafts of books, tv scripts, and magazine articles he dumped in the trash along the way to success.

But he also didn’t stop trying new things once he found something he was good at. He nurtured that talent. But he also kept looking for new ways he could impact the world with his creativity.

Success has ruined many a great artist because they’re afraid of failing at something different. Don’t let being terrible at something scare you like a classic Goosebumps.

Ask yourself this question today: What are you hiding from the world by not trying something new?