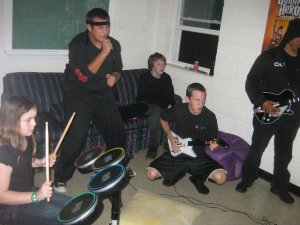 When I first stepped onto the job as youth pastor at The Hill Baptist Church five years ago, this was the call I heard every time a student would arrive at church.

Literally every Sunday and Wednesday before and after church we would spend at least an hour playing “Livin’ On A Prayer” and “Alive” (or at least pretending like we were playing them). We themed 2 Lock-Ins after our Rock Band and Guitar Hero addiction.

I even spent one Saturday afternoon with two students playing through the ultimate setlist of every song on Rock Band 2 in one sitting. We played through half of the setlist before I accidentally tripped over the power cord to the Xbox 360. So we turned the machine back on, started from the beginning, and played through it all again. 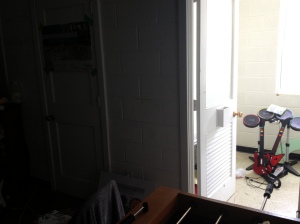 Students used to be chomping at the bit to shred a guitar solo or pound the plastic drums on the next song, establishing their spot as the next in line to lead a rock star revolution.

Now the pieces of Rock Band sit in a closet on the 3rd Floor of The Hill. Sometime in 2010 the music game phenomenon abruptly died. One week we were jamming like normal. Then one week no one wanted to play Rock Band or Guitar Hero anymore. So we just stopped. And that was that.

The game was a fad, a supernova whose light burnt out. Rock Band was incredible, exhilarating fun while it lasted, but now it’s just a relic of what used to be relevant, a fond memory collecting dust in the closet.

As I prepare to step down from my position at The Hill, I pray The Hill Youth does not end up like Rock Band. What I hope is for this youth group to reverse the Rock Band trend.

The Hill Youth means something more than a “fun while it lasted” fad. It means family. It means a group of students gathered together around the concept of “Thy Kingdom Come, Thy Will Be Done.”

It is possible. It is up to this youth group putting their faith above and building their foundation upon Christ’s solid rock. I believe in them.

The Hill Youth students are on deck. They’ve got next. I pray they will rock the city of Augusta for years to come:

Then David said to his son Solomon, “Be strong and courageous, and do the work. Don’t be afraid or discouraged, for the Lord God, my God, is with you. He won’t leave you or forsake you until all the work for the service of the Lord’s house is finished.” (1 Chronicles 29:20)

One thought on “The Death Of Rock Band”