You’re never too old to learn something from youth camp.

Last week I took my students from The Hill Baptist Church of Augusta, GA to Big Stuf camp in Panama City Beach, FL. Together with about 1500 other students we laughed, sang, and learned together about God’s Reality.

This is the 25th year of Big Stuf. Each summer founder Lanny Donoho and a crew of speakers, musicians, magicians, acrobats, and comedians have come together to proclaim the crazy things God wants to do in the lives of students. Here’s a few things I took away from the main session speakers Jamey Dickens and Jon Acuff:

1) God’s Reality > Your Reality – The theme for Big Stuf was “Reality”. Opening night speaker Jamey Dickens gave us this simple equation to frame our viewpoint for the week. God sees things differently than the way we do.

2) Just Be Willing To Walk – God gave Joshua and the Israelites a list of commands to break down the Walls of Jericho around them. The first command? Walk. Just keep walking around the walls. Maybe all you need to do today is start walking around the walls in your life. Whatever boundaries you have in front of you may not be able to crumble in one day. The first step is to just start walking with God around them as you begin the conversation with Him about what to do next. (Jamey)

3) “Walk with the wise and you will become wise, but the friend of fools will suffer harm.” (Proverbs 13:20) Choose the friends closest to you wisely. They have a greater influence on you than you realize. Jamey used the illustration of a literal Stamp Of Approval to talk about the acceptance we long for from our peers. The lengths we will go to fit in and be loved know no boundaries.

4) You can be a thermometer or a thermostat. You have a choice. You can either be influenced by the temperature of everyone around you. Or you can set the temperature of the room you’re in by the actions and choices you make. (Jamey)

5) Ready is a myth. We often think we aren’t quite ready to do what God is calling us to. But we don’t have to be ready because we serve a ready God. (Jon Acuff)

6) When God is silent He’s probably just planning a party. Jon broke down the story of the Prodigal Son and highlighted something you may not have ever noticed. The father in the Prodigal Son story doesn’t speak to his runaway child. Not once. Even when the son runs back to embrace the father, Dad pulls his son in silently. Instead of speaking to the son, the father yells out to his servants to began preparing the welcoming party. If you don’t hear God’s voice, don’t worry. He may just be pulling you in close as he prepares something spectacular for you.

7) We have a savior, not a solution. Jesus saves us and invites us into an adventure. He doesn’t always give us a step-by-step map for the journey. He does promise to always be by our side. For that reason we must heed the most common commandment in the Bible: Be Not Afraid. (Jon)

8) Fear Fears Community – The voice in your head is rarely a positive one. At some point we all hear negative narration in our minds telling us, “You’re not smart enough,” “You’re not pretty enough,” “You’re not strong enough,” You’re not good enough.” Jon asked all 1500 of us at Big Stuf to write down the negative voice we hear the most. Instead of lighting them on fire or throwing them in the trash, Jon challenged us to share the words with our group because Fear Fears Community. The fears in our head are usually silly and insignificant when brought into the light. Sharing them with someone else is the first step to overcoming them.

9) Look To The Birds – Jon Acuff put a twist on Jesus’s command to refrain from worry from the sermon on the mount. When Jesus told his followers not to worry about life, He told them to look to the birds and see how well the Heavenly Father feeds them. Though I’d read this passage countless times, I never broke down what a simple comfort this command is. Birds are a constant presence in our world. We can look out our windows any time during the day and see them constantly flying around. God’s reflection of comfort for our worries exists in billions of birds effortlessly floating through the sky. 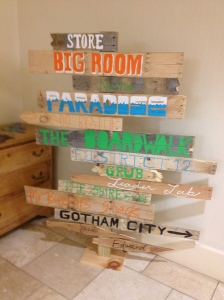 10) Just Hold On. Sometimes you won’t always be able to see where the plane is landing. You have to trust the pilot and Just Hold On. (Jamey)

Number 10 was exactly the message I needed to hear at the end of camp. (Yes, while the students are learning, the youth pastors are learning at camp too.)

At the end of the final night of Big Stuf I shared with my students that I would be stepping down as the Director of Student Ministries at The Hill Baptist Church. Lately God has been taking me on a plane ride where I don’t know the final destination.

Though I’m not sure the path of the plane, I have to trust God has flown this route before. He knows exactly what He’s doing. His reality is greater than my reality.

God is in control of the youth group at The Hill as well. He is the foundation – stronger than any one person. He showed at Big Stuf that His work is not done. This isn’t the end of a story in my life or in theirs. It’s the beginning of something new. We just have to hold on.

See, I am doing a new thing! Even now it is coming. Do you not see it? Indeed I will make a way in the wilderness and rivers in the desert. (Isaiah 43:19)

If you’ve been to Big Stuf this year or any year in the past 25, I’d love to hear what you learned. Leave a comment below with something you learned or a favorite memory from a Big Stuf camp: