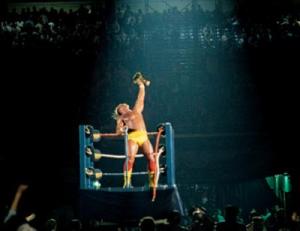 If I could sum up everything I’ve ever learned from pro wrestling in one sentence it would be this:

The face beats the heel.

In wrestling terminology there are two types of characters – faces and heels.

The heel is the villain. People like The Million Dollar Man Ted Dibiase, Ric Flair, and Mr. McMahon were great heels.

Wrestling at it’s core is the story of a good guy versus a bad guy. Almost every single wrestling match in history consists of a face versus a heel. And the face beets the heel.

The heel may get the upper hand. He may vanquish a few good-hearted men along a path of destruction. But in the end the heel always goes down.

This is the cycle of wrestling, a never-ending story where the characters change but the outline stays the same each week. END_OF_DOCUMENT_TOKEN_TO_BE_REPLACED

I remember when The Golf Channel launched in 1995. Living in Augusta, GA The Golf Channel came standard on our cable package. It was the first specialized network I remember coming on television, a channel devoted entirely to one sport.

As my parents watched The Golf Channel and I sat on the floor playing with my wrestling figures, I wondered if one day there might be a WWF Network.

19 years later my dream came true when the WWE Network launched (ok, my dream was one letter off).

The WWE Network is a 24/7 streaming video channel and on demand library. It’s a pretty revolutionary concept and is changing the landscape of the pro wrestling business.

For just $9.99 a month viewers get access to every major wrestling show of the past 30 years, plus every future pay-per-view event. Then there’s all the classic episodes of Monday Night Raw I grew up watching with the likes of Razor Ramon, Yokozuna, and Bret “The Hitman” Hart.

The catalog of programming is overwhelming in scope. It’s everything I ever wanted it to be and so much more.

So why am I not more excited about The WWE Network? END_OF_DOCUMENT_TOKEN_TO_BE_REPLACED

There have been a lot of great talkers in the history of wrestling. It’s hard to pick out the best of all time.

You have to consider “The American Dream” Dusty Rhodes:

Hulk Hogan and Randy “Macho Man” Savage must be near the top of the list:

But to be the man, you have to beat the man. And the man nobody could beat at promos was Ric Flair: END_OF_DOCUMENT_TOKEN_TO_BE_REPLACED