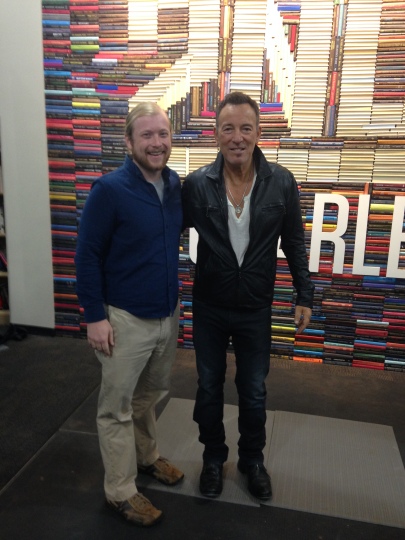 It’s a little ironic that I ended up meeting Bruce Springsteen at a used record store.

Last week I had the incredible opportunity to attend a meet-and-greet with The Boss at a store outside of Atlanta called 2nd and Charles – a place where you trade in used cds, records, books, movies and games for a fraction of their original value.

I’ve been a Springsteen fanatic for close to 8 years now. But it wasn’t always that way. When I was in high school I went through a phase of trying to expand my musical tastes. In doing so I purchased a copy of “Born In The U.S.A.” to dive into the world of the E Street Band.

I listened to it for about a week before I decided Bruce Springsteen wasn’t for me. I traded in the cd for some spare change at a store just like 2nd and Charles.

I had no idea that one day years in the future I’d be so obsessed with the New Jersey rocker that I’d be willing to stand in line for nearly 4 hours simply to shake his hand and take a picture with him.

Even though I paid $40 to only get about 15 seconds with my idol (more on that later) I thought the experience was worth so much more than I paid for it.

There was a little over a week between when tickets went on sale and the actual event so I didn’t have too much time to freak out about this once-in-a-lifetime encounter. But I did spend most of the days in between wondering just what I would say to the man whose music and lyrics have meant so much to me.

Should I ask him a question? Should I try to make him laugh? Is there anything I could possibly say in a matter of seconds that would actually be meaningful?

Ultimately I settled on the two simple words I kept coming back to in my mind: “Thank you.”

Those two words are ultimately the reason I wanted to go meet Springsteen in the first place.

I debated for a few minutes before buying the tickets if the event would really be worth it. Did I really need to spend money, especially when we’re on a tight holiday budget, just to snap a picture with Bruce Springsteen?

Ultimately I decided this might be the only opportunity I ever get. In a year where the music world has been rocked by the unexpected deaths of Prince and David Bowie (to name just a few) it’s more clear than ever that our heroes are not immortal.

As I was waiting in line for my moment with Bruce my mind wandered to my faith, as it tends to do.

I started to put this moment in perspective with my relationship with God. The more I thought about it the more this meet-and-greet made me thankful for the opportunities I have to meet-and-greet with Jesus.

Every day I have the chance through prayer to speak with my Creator. I get the chance to say whatever I want to Him – to ask Him any question, to express any desire, to seek His guidance, and ultimately to give thanks.

What’s even more amazing is that I’m not alone in this – we all have the opportunity to spend not just a few seconds but as much time as we went with our Creator on a regular basis.

We also must not worry about getting the words right when we talk with God.

I think sometimes we put off prayer because we’re afraid of not saying the right thing or sounding foolish in front of God.

As a youth pastor I see this fear of prayer constantly with students. Ask most students to say a prayer and you’ll see their faces sink and their eyes bulge out of fear.

It’s not just kids though. Adults too can find themselves avoiding the chance to speak with God because they don’t know what to say.

I said earlier that I got about 15 seconds with Bruce Springsteen. That’s about 10 seconds more than most people got that day. That’s because the employees at the meet-and-greet messed up my picture with Bruce the first 2 times they tried to take it.

Each time I was whisked away from the rock star only to be awkwardly shuffled back beside him for another photo op.

Each time I fumbled for the right words to say again in this bizarre moment.

And each time Bruce just smiled and wrapped his arm around me again. I apologized and he just laughed it off knowing how important this moment was for me.

I think that’s what God does when we fumble over our words when we commune with Him.

When we struggle over what to say to Him, God smiles and wraps his arms around us. He comforts us and encourages us. He accepts our flaws and imperfections and loves us all the same.

Because much like Bruce Springsteen didn’t have to take time to meet his fans, God didn’t have to give us the gift of prayer. It’s not for His benefit. It’s for ours.

Bruce Springsteen didn’t have to do a meet-and-greet in a used bookstore 30 minutes outside of Atlanta. He didn’t have to shake hands and take pictures with 500 of his fans.

His autobiography Born To Run is already a bestseller. It’s not like he needs to keep pushing it.

But Bruce Springsteen took the time to meet the people he’s touched and inspired over the years.

He patiently smiled and posed with each adoring fan to give them all a special moment they could cherish for the rest of their lives.

Although we all tried to work up the words to say something meaningful to him, there was really nothing we could say that Bruce Springsteen had not already heard over the past 40 years.

That’s not to say our words didn’t matter. I’m sure Bruce appreciated every word of thanks he got that day and that’s he’s gotten from every meet-and-greet he’s done.

But I don’t think Bruce Springsteen does meet-and-greets with his fans for his own ego. I think he does them as a gift for his fans – a way to give back to them in gratitude for all the support they’ve given him over the decades.

In much the same way God doesn’t need to give us a chance to interact with Him. He didn’t establish prayer as a way to stroke His own ego. God gave us the gift of prayer as an act of love to His children so that we could have the incredible opportunity to commune with Him.

Let us not take this gift for granted. Let us make the most of the chance to meet-and-greet with God, even if we can’t come up with anything more to say than “thank you”.

For more thoughts on Springsteen and faith check out these posts:

Bring On Your Wrecking Ball

2 thoughts on “My 15 Seconds With Springsteen”