I’ve always enjoyed the rain. While others get depressed by storm clouds in the sky I tend to find them soothing.

In fact, I think it’s kind of funny when people freak out about a little precipitation. I know some people who won’t leave the house or drive their car if they see a rain drop.

And to be fair these people are probably more sane and just living more safely than I am, so I can’t really fault them.

It’s just that I don’t think hiding from bad weather is any way to live your life. So if you’re staring into storm clouds this week, maybe you could use a little Monday Morning Music to motivate you to step outside:

Frank Turner’s latest album “Positive Songs For Negative People” (I love that title) is full of sweeping and hard-rocking English-bred anthems meant to motivate downtrodden folks to keep fighting amonst life’s harshest battles. No song is more emblematic of this than “The Next Storm” whose chorus proclaims:

I don’t want to spend the whole of my life indoors,

Laying low and waiting for the next storm. 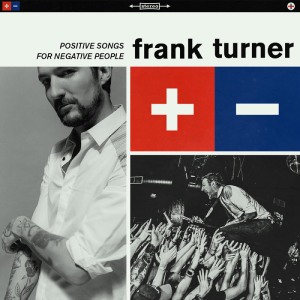 You see, that’s the thing about storms – there’s always going to be a next one.

No matter what sort of anti-rain dance you do or precautions you use, you can’t avoid rain (unless you life in California these days).

No matter how faithful we may be, we can’t avoid the storms of life either. Anger, depression, jealousy, heartbreak, stress, death. As soon as we pass through one storm you can guarantee another is on the way.

Because just as reliable as the next storm beginning is the truth that every storm will end.

Can you imagine if Noah had stayed in the ark after the flood? I mean, he had seen the safety the ship provided and the devestation rain could bring. He knew that even though one storm was over another one could come at any time. Why not stay indoors?

Noah had seen the harshest storm known to man. He had also seen it end. He knew no storm coming after could compare to what he had been through and that God would sustain him no matter what else he or his family might face. (Gosh, that would make a great movie plot, wouldn’t it?)

God built us to face the storms of life with the knowledge that the rain will dry and we can keep going. When the harshest weather comes we should of course take shelter. But we shouldn’t be content to stay there. As the song goes, “Rejoice. Rebuild. The storm has passed!”

Staying indoors to avoid life’s storms is no way to live a life. You may stay dry but you’ll miss out on the light breaking through the clouds leading you somewhere greater.

In the music video Frank Turner faces off with former WWE and future UFC star CM Punk in the ring. He gets beaten down again and again. But he weathers the flurry of Punk’s punches, finally outlasting him and taking him down to the mat at the end.

We must keep fighting in the face of the storms floating over our heads. We can retreat indoors but only for a time. Or else we will miss out on the places we could have gotten if we had pressed through and just gotten a little wet.

The God who sends the rain is the same savior who sleeps during storms – not out of a lack of caring but because of a peace that transcends all understanding. We must hold onto this peace when the clouds begin to circle our life.

Storms are meant to strengthen, not to scare us, because we know if hold our ground the storm will pass. Another will surely come. But we must only face what is before us, trusting in God’s protection in the present instead of fearing the forecasts of the future.

The Lord spoke and raised a tempest that stirred up the waves of the sea. Rising up to the sky, sinking down to the depths, their courage melting away in anguish, they reeled and staggered like drunken men, and all their skill was useless. Then they cried out to the Lord in their trouble, and He brought them out of their distress. He stilled the storm to a murmur, and the waves of the sea were hushed. They rejoiced when the waves grew quiet. Then He guided them to the harbor they longed for. (Psalm 107:25-30)

For more Monday Morning Music and other inspiration from Pop God, subscribe to get every new post delivered straight to your inbox