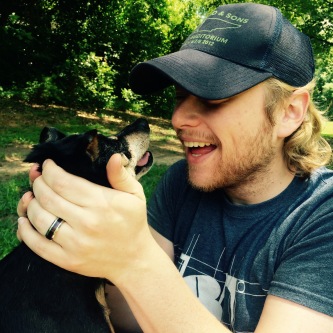 My dog is missing a toe.

His name is The Roc. He’s a tough, old miniature pinscher. He didn’t lose his toe through any fault of his own.

You see, I adopted him a few years ago. And for as long as I’ve had him one of his toes has given him problems. Eventually an infection popped up and our vet thought it would be for the best to remove the toe.

What started out as a simple surgery turned into a maelstrom of problems.

The Roc always had a couple of quirks about him – the weird toe, a tiny cyst above his eye, a hacking cough. Nothing big, just the effects of old age. So when he went in for surgery the doctor took care of a few nagging issues in one sweep.

During the surgery the vet also noticed questionable cyst in his mouth and decided to snip it out as well. That’s where the trouble really began.

The Roc bled and bled out of his mouth all over my carpet for a two days straight. I did my best to stop the bleeding the first night, but when I woke up in the morning there were trails of blood all over the carpet.

Then came the incessant pawing at the scar on his eye, necessitating the dreaded “cone of shame”. Finally, he somehow managed to scrape up the left side of his torso one day while I was gone at work (we never figured out how it happened). He ended up having to wear a baby t-shirt for weeks to protect the ointment he needed for the cut to heal up. Every day for a month or so was a new adventure in trying to care for The Roc.

If you don’t have a dog you’re probably shaking your head at this point.

Why would I go through all this trouble for my dog? He’s just an animal. He can’t grasp what I’m doing for him. He can’t thank me in any way.

What’s the point? Why would I take care of a dog with a missing toe?

Because I love him. And because he can’t take care of himself.

It’s the same two reasons why God constantly takes care of us: Because He loves us. And because we can’t take care of ourselves.

The uninformed may ask why God bothers with humans. Why would He send his precious and innocent son to die in our place? Why would God rescue us?

It all sounds illogical. But the answer is in God’s role as our Father.

God is a Heavenly Father. We are His children. God saw His children ensnared by sin. He saw we could not rescue ourselves from this deadly trap.

He could not stand the thought of being separated from His children. So He took care of us.

The difference between humans and dogs is that dogs will never understand why we love them so much. My dog will never grasp why I, his earthly father, keep sacrificing for him.2 years after his surgery I’m still waiting on my Thank You Note from him for all the care I gave to him (I guess I’ll have to settle for the way he snuggles into my lap every night as a sign of his appreciation).

A human’s brain works differently. We can, at least to an extent, make some sense of how incredible our Heavenly Father’s love is (though we will never full grasp it in this life). We can be humbled by His grace.

The next time you’re missing a toe, or need to be taken care of in any way, you have a choice. You can accept God’s grace and go right back to what you were doing without even a word of gratitude. Or you can choose to stop taking advantage of our Father’s unconditional care and instead let your life be transformed by it.

More Adventures With The Roc:

Why I Give My Dog Christmas Presents

Life On The Leash

Are You Missing The Answer Right In Front Of You?

One thought on “What To Do When You Lose A Toe”