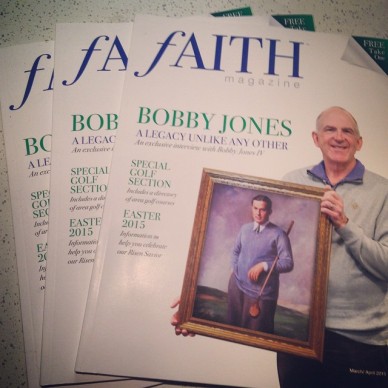 (Earlier this year I had the incredible opportunity to interview Robert Jones IV, the grandson of legendary golfer Bobby Jones, for a feature story for Faith Magazine. The story graces the cover of the March/April edition of Faith Magazine. You can pick up a copy of the free magazine at grocery stores across the CSRA or check it out on the Faith Magazine website. I’m so proud of this interview that I wanted to share a preview of that story with the POP GOD audience. Enjoy this introduction, and check out the full story when you get a chance. )

Bob (as Robert IV prefers to be called) knows the stories well. He can tell you the story of all of his grandfather’s trophies, including the one he broke as a child tinkering around on vacation at his grandparents’ mansion. In addition to his full-time calling as a psychologist, Bob’s other profession is preserving the legacy of Bobby Jones, a man he called “Bub.”

Bob remembers a different side of his grandfather. He saw more than the legend whose name is etched into the foundations of the city of Augusta and the game of golf. He saw more than a statue or a logo or a mythical name. He saw a man who struggled from a crippling disease, who fought valiantly to survive and whose faith kept him on course when his life was fading.

Despite the world’s perception of Bobby Jones, golf was not the only topic of conversation for those growing up in his family. As strong as the association with the sport may have been, there was one thing more important around the Jones household—faith.

Of course, as with most things tied to the legacy of Bobby Jones, there was nothing ordinary about his family’s spiritual life. “A real melting pot,” is the phrase Bob uses to describe his family’s faith.

The original Robert Tyre Jones was a staunch Baptist. He served as the superintendent of his Sunday school class for 33 years. Under his leadership, it had the highest Sunday school attendance of any class in the church. His son Bobby was raised in the Baptist faith.

The melting pot began when Bobby married his love, Mary Malone, who was a devout Catholic. It’s been noted that Bobby converted to Catholicism a few days before his death as an act of love toward his wife.

The Catholicism was passed down to Robert III, who then ended up marrying a Methodist. It was a bit of a complicated lineage for Robert IV to be born into.

Here’s one way Bob sums it up: “We would always watch Bishop Sheen every week, but also whenever the Billy Graham crusades were on, we would watch that as well. It was an intriguing way to grow up.”

Whatever the blend of practices, the Christian faith was a constant in the Jones family, and the heart of the gospel made an impact on Bob at a young age. The same cannot be said for that other family tradition—golf.

Bob did not show much interest in golf as a child. Growing up in the north, where the seasons are not as friendly for the links, he spent more time playing hockey and soccer.

Then, when he was twelve years old, he went to The Masters for the first time.

“It hit me in a flash that all of what I was seeing right there had existed first in my grandfather’s mind,” Bob reminisces about the first time he stepped onto the course. “And it just totally floored me. It’s the first time it really hit me, the magnitude of who the man was.”

Bob started following the family footsteps that summer, taking his first golf lessons. Yet as the boy was taking the game up, his grandfather could not have been farther from the course.

“By 1970 he was down to about 90 pounds,” recalls Bob. “His hands were permanently locked. He was just in the ravages of this disease.”

The disease was called syringomyelia. It destroyed Bobby’s body, stealing from him not just his talents but the ability to perform the simplest of tasks. It was this Bobby Jones that his grandson became acquainted with.

Instead of holding up trophies Bobby could no longer even hold up a book to read. The man who was known as the Emperor Jones, who once waved to patrons in the midst of parades, could hardly lift his hand to wave or motion to his family.

Despite all the fame and fortune the world could possibly offer, there was only one way Bobby Jones could stand to face such a cruel fate.

“I think part of the way that he was able to bear his illness was a direct result of faith,” his grandson believes. “How else do you bear something like that?”

Bob remembers his grandfather persevering through the pain. Though he does not claim that Bobby was perfect, he vividly remembers the strength he showed in battling his crippling illness.

His last words left an indelible mark on young Bob: “If this is what it’s like to die, it’s beautiful.”

(To read more about Bob’s personal testimony and how his family’s faith shaped him, check out the full story in the March/April edition of Faith Magazine. It’s available for free at numerous locations across the CSRA. You can also read the full story on the Faith Magazine website.)