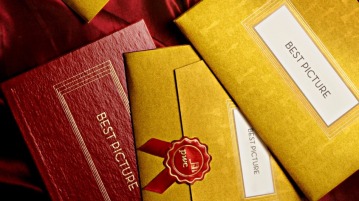 This Sunday night hundreds of nominees will sit inside a Hollywood theater anxiously awaiting to hear their name read. For if a presenter opens an envelope and does shout out their name it means they’ll be taking home the most important prize in the movie business – an Oscar.

For weeks and weeks the actors and writers and producers and directors nominated have been endlessly campaigning to win the golden statue.

Ads have been taken out in magazines and papers. Billboards have been plastered across Hollywood. Talk shows have been littered with performers on their best behavior trying to impress the voting audience.

But when the Academy Awards begin this Sunday there will be nothing anyone can do to alter their fate.

It’s true – there is nothing anyone can do to win an award on Oscar night. The decisions have been made. The winners have been chosen. The names have been written down. The (extremely expensive) envelopes have been sealed and locked away.

The fate is out of the nominees’ hands. The victory is up to the voters.

The only way to win an Oscar is for someone else to write your name on a slip of paper.

In the end it all comes down to the name the voter decides to write down. The same goes for any award or trophy. Despite the work done, ultimately the fate of the accomplishment is in someone else’s hands.

I was struck by this thought when I recently read these words from Jesus in the book of Luke:

Look, I have given you authority over all the power of the enemy, and you can walk among snakes and scorpions and crush them. Nothing will injure you. But don’t rejoice because evil spirits obey you; rejoice because your names are registered in heaven. (Luke 10:19-20)

He tells the disciples that they have the power to do incredible things. But ultimately the greatest victory is out of their hands.

Our greatest actions, our most impressive feats, our most incredible words and performances will not earn us anything in the end.

Our greatest joy comes because Someone Else has written down our name in the Book of Life.

Winning an Oscar often opens up opportunities an actor never could have dreamed of before. Many in Hollywood go on to even greater work once they’ve won, unburdened by the pressure of trying to establish their worth through a trophy.

Wouldn’t it be amazing if the same could be said for you?

The vote has been cast. Your name has been written down. You’ve already won.

Don’t rejoice over what you are capable of winning today. Rejoice because of what God has already won for you.