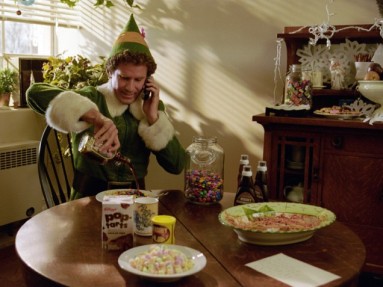 GUEST POST: Today’s contributor to The 12 Blogs Of Christmas is my friend Michaela Pollock. Michaela is a Senior at Georgia College & State University with a real heart for inspiring and encouraging others. I’m excited to introduce you to her today. Enjoy her contribution to POP GOD:

To this day I remember the first time I watched the movie Elf and fell in love with the touch of claymation, the adorable elf outfits, and how simple joy is represented through the entire story.

I received the movie Elf from my Aunt Diane, who my dad often says I am just alike, so there had to have been some kindred spirits working there when she bought it for me. I watched it that day with my extended family and about immediately it became my favorite movie.

I would like to pride myself as being the female version of Buddy the Elf if I could, so I think we could learn a thing or two from Buddy and the movie itself.

First off, Buddy exudes Joy. No matter the situation, whether it’s being thrown out of the Empire State building or walking from the North Pole to New York City, he is consistently happy about it, cherishes the moment, and isn’t embarrassed or concerned about what others may think.

The simplest things make him joyful, such as drawing a picture of a butterfly, or eating cotton balls. Buddy cannot be beaten by losing his “job” or by the fact that his dad is on the naughty list. He continues to fight for joy.

Buddy is also quick to love. Whether it is a friend in the mailroom, his younger brother, or his new found dad (whom he doesn’t know much about) he aspires to have fun and make memories with them. He treats them with kindness and aspires to include them at all times.

He simply believes that Santa is real and spreads children with cheer all around the world. Buddy is absolutely himself no matter the circumstance.

I think the reason I am so easily drawn to in Buddy is that he holds the true spirit of Christmas that first came from Jesus’ birth.

People were so drawn to him because of the promise that He held – to save us. Jesus came to teach us how to live a life that isn’t about ourselves.

He grew up before him like a tender shoot, and like a root out of dry ground. He had no beauty or majesty to attract us to him, nothing in his appearance that we should desire him. He was despised and rejected by mankind, a man of suffering, and familiar with pain. Like one from whom people hide their faces he was despised, and we held him in low esteem. Surely he took up our pain and bore our suffering, yet we considered him punished by God, stricken by him, and afflicted. But he was pierced for our transgressions, he was crushed for our iniquities; the punishment that brought us peace was on him, and by his wounds we are healed. (Isaiah 53:2-5, ESV)

Buddy simply wants more and more joy to be spread, especially during Christmas time. This is so encouraging because we need to be reminded of the richness that Christ’s birth brought. Buddy is so quick to love and to spread joy to others, just like Jesus.

So, really, I think Buddy may be my role model because he reminds me of my Savior, Jesus Christ.  In the movie, the narrator in fact says, “His spirit saved others as well.” Just as Buddy helped other’s see the true meaning of Christmas, Jesus came to show us life and how to live our lives righteously as his children.