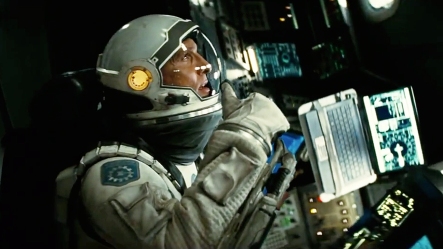 “Love is the one thing that transcends time and space.” – Interstellar

In the end we’re all just trying to communicate with something outside of ourselves.

It’s the theme of Interstellar, the good (not great) but certainly worth seeing new film from Christopher Nolan.

On the surface the plot is fairly basic for a sci-fi space drama. In a not-too-distant future where our pursuit of technology has actually driven the world back in time to a Dust Bowl-like era, an undercover space exploration team is pursuing alternative planets for mankind to inhabit.

I don’t think I’m spoiling the film by saying the story is really all about communication. There’s the communication between the astronauts and mission control, between the explorers and new planets and most importantly between the heroes and the families they leave behind.

Cross-sectioned with communication the most important element to the story is that of time. Our planet is running out of time. The astronauts will be gone for decades at at time. The move raises some interesting questions about whether there is a way to communicate through generations, through dimensions, through time?

As I tried to collect my thoughts about the movie, I was drawn to a particular parable in Luke 16. Jesus tells the story of a rich man and a beggar outside his gate. Both men die at the same time – the poor man ascends to Heaven, the rich man is separated from God for all eternity.

As the rich man contemplates his fate, he begs the angels above him the chance to communicate with the family he left behind:

And he said, ‘Then I beg you, father, to send (the beggar) to my father’s house —for I have five brothers — so that he may warn them, lest they also come into this place of torment.’ But Abraham said, ‘They have Moses and the Prophets; let them hear them.’ And he said, ‘No, father Abraham, but if someone goes to them from the dead, they will repent.’ He said to him, ‘If they do not hear Moses and the Prophets, neither will they be convinced if someone should rise from the dead.’” (Luke 16:26-31)

The rich man pleads for one last chance to tell his brothers to repent. He cries out to communicate from beyond.

This parable asks the questions generations generations have raised through the ages. Is there a way to communicate from the great beyond? Are our ancestors speaking to us? When we pray does God say anything back?

The answers are clear from this parable: yes, yes and absolutely yes.

There is communication coming from another realm. The generations before us are crying out. God is answering our prayers.

Much like a mysterious bookshelf featured prominently in Interstellar, the answers to our longings have been in front of us the entire time.

The answers are not in unexplored galaxies light years away. The answers we are looking for, the communication from beyond was placed in our hands long ago.

They are in the words which have been passed down through the ages.

The love of our incredible Creator – the one who dropped every star into place – transcends all theories and explanation. It is the purest form of communication, reaching out and beyond and through all space and time.

The world around us is rapidly deteriorating. Time will run out for us to communicate with those we love in this life. There won’t be a magical way to leave a message to them from beyond.

If you’re waiting for the perfect opportunity to communicate with the people you love, it’s already here. If you’re looking for communication from above, you already have it.

We don’t need a communique from space to give us the answers. Take the book off the shelf. Shake off the dust.

Open your eyes. Then spread the word.

2 thoughts on “Some Thoughts On Interstellar Communication”