Caution: This music may be too loud for your typical Monday Morning.

(Click Here if you can’t see the video above)

Inspired by lead singer Dave Grohl’s documentary Sound City which explored a legendary California recording studio, the Foo Fighters decided to document the creation of their new album Sonic Highways with an HBO series of the same name.

Each episode highlights the creation of one song on the album. While this sounds like an interesting enough concept, Grohl and the band aren’t making a run-of-the-mill album with Sonic Highways.

For their 8th studio record the band embarked on an ambitious project: each song would be recorded in a different legendary music studio across America. Dave Grohl would interview the greatest artists from each town looking for musical inspiration. After spending a week in cities like Nashville and Chicago the band would then write and record a song influenced by the people and places they’d seen.

It may sounds like a corny gimmick at first. But I can’t recommend the show and the music enough. 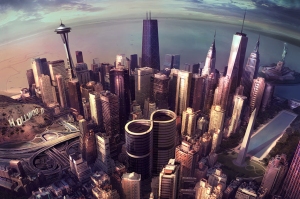 The lesson I’m learning from watching and listening to Sonic Highways is this: not only does our city shape us, we shape our city as well.

What’s really fascinating about the television series is hearing the stories of the hometown artists who were transformed by their own cities. In turn, their work often went on to make an impact on their hometowns.

We often think the greatest work we can accomplish is a million miles away. It’s true that God has called us to take His message to all the ends of the earth. He has called us to love our neighbors.

And I think we are also called to love our neighborhoods.

I think sometimes we make excuses about our service to God based upon our current location.

These are good and noble desires. There will a come time for many of us to pursue them.

But if you want to rock the world today, you don’t have to travel to the ends of the earth.

Like it or not, where we live has a tremendous impact on our lives. Believe it or not, God has placed us exactly where we are for a reason.

For some of us the greatest story we will tell will involve our hometown. For all of us there is something we can do today to impact our city.

Here’s your challenge for the day. Take 3 minutes or so – the length of your average song – and think of 3 people you know in your city who you could have an impact on today. Then go do it.

Give them a call. Go say hello. Invite them to your church or just over for dinner.

You really don’t have to travel far to find someone to serve.

Just plug in your mic, turn it up loud and start singing a song to your neighbors next door.