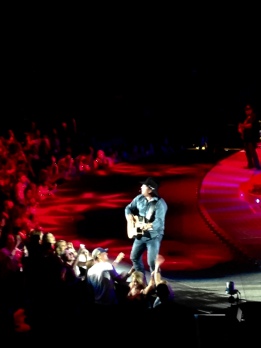 Without a doubt the CD I’ve listened to the most in my lifetime is “Double Live” by Garth Brooks.

There is something magical about this album to me. Garth Brooks’ songbook was the soundtrack to my childhood. Growing up in Tennessee and Georgia I was raised on 90s country music. And Garth’s music was the gold standard.

“Double Live” collected all of Garth’s greatest hits across a 2 disc live set. So to begin with every song was a winner. Add in the raucous live crowd that Garth drew to his incredible live performances and you have the makings for an amazing album.

I listened to that CD on my headphones in the backseat of so many family car trips. I blasted it on the boom box in my room. I’ve rocked out to it with the windows down in every car I’ve ever driven.

Those opening chords of “Callin’ Baton Rouge” on disc one stir up a special feeling in my soul no other album does.

So there weren’t a lot of surprises when my fiancé and I saw Garth Brooks this weekend in Atlanta as part of his first world tour in over 12 years.

I knew when all the solos would be. I knew when Garth would stop singing and let the audience sing the words to “Unanswered Prayers”. I knew to expect the mysterious 3rd verse for “Friends In Low Places”. 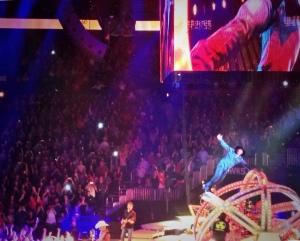 Being in Garth’s electric presence. Seeing him move across the stage and interact with fans (even posing for pictures and stealing camera phones to snap his own while still singing). Hearing the roar of the crowd inside the Philips Arena, the loudest I’ve ever experienced.

Being there in person took things to an entirely different level of awesome.

As much as I thought I understood the Garth Brooks live experience, nothing could compare to actually participating in the concert.

I think it’s like the difference between reading about Jesus and experiencing Jesus.

I’ve read through the Bible over and over. I have verses memorized and passages highlighted and pages earmarked.

But nothing can compare to experiencing Jesus firsthand.

Of course I’ve never physically met Jesus. I’ve never stood in the same arena as him. I’ve never heard the true sound of his voice.

What I mean by experiencing Jesus is experiencing his love, his forgiveness, his mercy, his grace. These are the ways I’ve experienced Jesus.

When I actually see his love for me, and see his grace at work, and understand his forgiveness, that’s when my relationship with him is taken to another level.

Reading about Jesus is completely different than experiencing him and what he offers.

Which makes me think: instead of just telling, we need to do a better job of showing who Jesus is and what he was all about.

There are countless people in our lives who have heard about the God we worship. They’ve read our statuses. They’ve listened to us on a loop.

Sharing just the words of Jesus with someone is like giving them a copy of a CD. No matter how great the album is, it will never be the same as experiencing the concert first hand.

I’m just as guilty of this as anybody. I spend so much time writing this blog and I don’t spend enough trying to share Jesus with my actions. I want to do a better job of that.

There are people in our lives who have only ever heard about the love of Jesus and never experienced it live and in person. I think it’s up to us to stop handing them CDs and start inviting them to the concert.

One thought on “What Garth Brooks Taught Me In Concert”