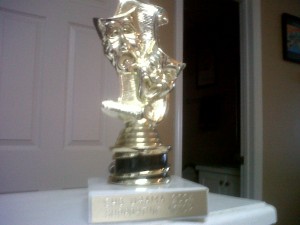 With The Oscars coming up this Sunday night, everybody’s getting all worked up about who’s going to take home the big gold statues this year.

Pfft. Big deal. I mean, I don’t want to brag, but I have a pretty good supply of trophies I won during my childhood.

I wasn’t a particularly stellar athlete – I just grew up in a generation where everybody got a trophy at the end of every season, regardless of wins and losses.

Some people complain about how our culture gives trophies to kids just for participating. I think it can be a good thing.
A trophy is more than a reward; it stands out as a memory of a journey. The problem is when the pursuit of a trophy becomes your only obsession.

I faced this problem in my high school drama class. At the end of every year all of the drama classes at school got together for the Drama Awards, our version of the Oscars. As a freshman, I thought I was destined to have a trophy case full of these awards.

But I didn’t win an award my freshman year, nor did I win one my sophomore or junior years. This puzzled me.

I thought I was hands-down the best performer in not just my class, but the entire school. My ego was out of control.

Finally, my senior year, I picked up a win. It was satisfying, and I think it’s because I learned something along the way to get that award.

You see, my award was for Best Supporting Actor. I whiffed on the whole idea of “supporting” my first three years in drama class. I focused on my own pursuit of a trophy.

My reward finally came when I learned the best way to make myself a better actor was focusing on not just my own performance, but the performances of everyone around me.

When I learned to focus on the play as a whole and not just my performance, I became a better actor. My Drama Award stands as a reminder that to make myself better, I need to focus on supporting others.

Jesus’s disciples once put him in a corner and asked him, “Which of us gets the highest rank in God’s kingdom?”

They were basically asking Jesus, “If you had to give out a trophy to your best friend in the whole wide world, who would you give it to?”

Jesus brushed their question aside. He told them to stop worrying about titles and trophies and start looking at life from a child’s perspective.

Kids care about life. Kids see the world as a playground, not as a competition.

Jesus told his friends not to worry about how many awards they can acquire. Instead, He said when you focus on supporting others more than yourself, you’ll win the ultimate reward in life.

Don’t get lost pursuing trophies; get lost in God’s pursuit of you. A trophy shines briefly; God’s love never dims.

Love others more than you love your own pursuits. Love others like a child.

(A version of this post was originally published for The Augusta Chronicle.)