The first thing I did when the power went out was go to my phone.

It’s amazing. Even just a few years ago I would not have had the luxury of another electronic plaything to occupy my brain while the power was out.

But during The Great Ice Storm of 2014, less power at home just meant more power for our mobile devices.

For many the power outages and school closings were an excuse to spend hours playing the latest game craze Flappy Bird.

Of course, if you hadn’t already downloaded Flappy Bird, you were out of luck. And not because the wifi was down.

In an event only slightly less tragic than the ice storm, the creator of Flappy Bird ruffled feathers last week when he pulled his wildly successful game from the App Store.

People started to go a little crazy. iPhones with Flappy Bird already downloaded were flying off eBay for thousands of dollars (although the site eventually shut down any such auctions). Imitations sprung up to satiate frenzied fanatics; my favorite was the Sesame Street-inspired Flappy Bert. 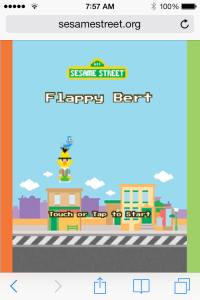 Between all the power outages and Flappy Bird madness, I wondered if this might have been what it was like when Jesus left the earth.

Although Jesus had warned His followers that He would be leaving soon, to them His death and disappearance were frighteningly abrupt. All of the sudden the man the discipled looked up to and had given their life to was gone. Their source of power went missing.

I bet a lot of imitators began popping up. I bet many of Jesus’s followers started look for another source of power, for an alternate source of energy, for something new to occupy their short term attention span.

I have to admit the Ice Storm was not that bad for me. My power was only out for less than a day. I didn’t have any tree branches to worry about cleaning up.

I actually kind of enjoyed the lack of power. I liked reading and writing by candlelight for a day. I had the most fun visiting my fiance’s family and playing Monopoly to pass the time.

Of course I spent a lot of time draining my cell phone battery so I could stay connected to the social media world too.

Now, this post is not meant to critique anyone who complained or struggled during the storm. Many people had good reason to be frustrated. I’m not sure how I would have handled things if my power had been out for 3, 4, or 5 days.

This is simply an observation on how quickly we turn to an alternate power source in our time of distress, myself included.

Instead of being patient when the power’s out, we begin checking our phone worrying about how we’ll survive.

Instead of letting a game fly away into the sunset, we try to replace it with a paltry imitation.

Instead of waiting patiently on the Lord, we begin building a new altar.

The desire for power is at the root of sin. Ultimately every person desires control over their lives. We feel most at peace when we feel like we’re in control over our surroundings.

Christians will sometimes cede control over to God, as long as it seems like God is working in their favor.

However when the power goes out and things look out of control, we think God has abandoned us.

The next time it feels like you’ve lost power over your life, just be patient. Wait it out. Weather the storm.

Instead of flapping aimlessly around searching for a new power source, find some peace in the quiet of the outage. Light a candle in the darkness as you patiently seek the Lord even more. Trust that His power will be restored.

For the sources of power and control in this world are temporary; God is timeless.

Know therefore that the Lord your God is God; he is the faithful God keeping his covenant of love to a thousand generations of those who love Him and keep His commandments. (Deuteronomy 7:9)

Where do you turn when the power goes out in your life?

One thought on “How To Handle A Power Outage”