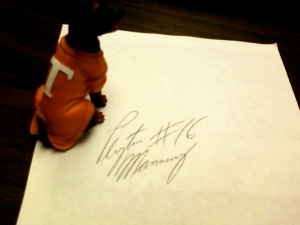 Let me tell you about the time I had dinner with Peyton Manning.

Ok. Well, the time I had dinner at the same table as Peyton Manning.

All right. The time I had dinner in the same restaurant as Peyton Manning.

My parents, graduates of The University of Tennessee, raised me as a big Volunteer fan. Growing up we would travel back to Knoxville about once a year for a home football game, especially in the years when Peyton Manning quarterbacked the team.

After the game we would sometimes go out to eat to one of our favorite restaurants: the legendary Ye Olde Steak House.

It was at Ye Olde Steak House, after a great Tennessee game, that my family noticed Peyton enjoying a post-game meal with his father Archie.

As a 12-year-old fan, I was in shock. After munching on appetizers and mulling over what to do, my family and I finally decided I should go ask for Peyton Manning’s autograph.

I was shaking, nervously spitting out words to one of my heroes about how much I looked up to him and how much it would mean if I could just have his autograph please.

By the time I had blurted out my prerehearsed speech, Peyton had already signed my paper and sent me off so he could finish his meal.

It wasn’t a fairy tale celebrity encounter or anything, but I don’t blame Peyton for not being ecstatic that a little kid interrupted his dinner after a long day of football.

Still, I was ecstatic. I have the autograph to this day.

I would have never had the chance to meet Peyton Manning and have dinner with him (for a few seconds) if I had not stepped out in faith. I could have easily been too scared to approach the future Hall-of-Famer and stayed at my table. But I took a chance and walked away with a keepsake I still treasure.

Peyton Manning knows a little something about faith himself.

After 12 years and a Super Bowl Championship run with the Indianapolis Colts, Peyton had a big decision to make in 2012.

He spent a year off the field recovering from a major neck surgery. His career was already the stuff of legend. Did he really want to risk his health to keep playing a few more seasons?

When Peyton Manning decided to sign a contract with the Denver Broncos, he had no idea he would wind up at Super Bowl XLVIII just two years later leading his team against the Seattle Seahawks for one more shot at glory. He could have easily wound up back on the injured reserve after a game or two.

In a recent interview with Peter King for Sports Illustrated, Peyton talked about how he decided to get back on the gridiron:

I can remember that time well two years ago. I asked every question of every doctor to give me some kind of timetable. “Can you give me some kind of definite answer about how I’m going to feel?” And none of them could. It was a test of faith and trust in the process and I knew I was going to put all the hard work I had into it and try to improve. But I couldn’t predict that we would be at this point.

You can’t predict what the world has in store for you. Even when you’re Peyton Manning, you can’t be certain you’re going to make it to the Super Bowl.

You just have to step out in faith. You have to trust in the process God has called His people to follow for thousands of years.

Turns out Peyton Manning and I had something in common back on that fateful evening in Knoxville. You see, it doesn’t matter whether you’re an all-time great quarterback seeking one final shot at glory or just an awestruck kid seeking an autograph. You really won’t achieve anything unless you have the fearless faith of a child.

Some people brought infants to Jesus, hoping He would touch them in blessing. The disciples rebuked them for doing so, but Jesus called to the people.

“Let the little children come to Me. Never hinder them! Don’t you realize – the kingdom of God belongs to those who are like children? You can depend on this: if you don’t receive the Kingdom as a child would, you won’t enter it at all.” (Luke 18:15-17)

One thought on “Peyton Manning’s Advice On Faith”