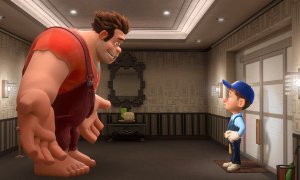 Do you ever feel stuck in your story? Do you feel like you’re living out the same plot, day after day after day?

Ralph makes his living as the villain in an ’80s arcade game. For decades he’s played the same character, living out the same story every day, losing to the same hero of the game in every battle.

Tired of the drudgery of his “day job,” Ralph finally decides to leave his post in the game, sending the rest of the characters into shock.

The concept for the movie is cute and clever. It also reflects our own lives.

Some days it feels like we can’t stop living the same story.

Some days it feels like we’re just going through the motions.

Some days it feels like the author of the story keeps running us through the same scenes over and over again, no matter how boring, painful or difficult they may be.

So how do you change the type of story you’re in?

The answer is quite simple: make a decision.

Really. Just make the decision to live a different story.

In the book of Luke, Jesus recounts the tale of a young man whose decisions changed his story. The young man, inspired by greed, decides to run away from home. He insults his father, draws his inheritance out of the bank, and heads off to the big city.

The son lives large for a time, but eventually his luck and his money run out. Soon he winds up a lowly servant in a field, yearning to eat even the slop that he feeds the pigs each day.

The son’s bad decisions are overwhelming. Stuck in a story of failure, he decides to do something different. He decides to return home to his father, hoping for a slightly better job and maybe a meal to eat.

When the son returns, the father doesn’t want to hear his apologies. He doesn’t set his son to work.

The father shows the son grace. He welcomes his son with open arms and a brand new robe.

When you decide to start a new story you may make some poor decisions along the way. God will be there waiting for you when you’re ready to leave those decisions behind. He won’t send you off on a painful road of penitence, but will accept you into a new life.

That’s God’s grace. Grace means you don’t have to earn a new lease on life when you’ve wrecked it. Grace will be there waiting for you to make a decision.

Be more like Ralph. Decide to do something different today. Invite a little chaos into your life. Do that thing you’ve been thinking about doing for a while now.

Refuse to be a character in a monotonous story. Write a new chapter.

I’d love to know: When do you feel stuck in your story? What’s one way you can disrupt your story today? Leave a comment below:

(This is repost of a guest column I originally wrote for the Augusta Chronicle. Check out my archives for the Chronicle here.)