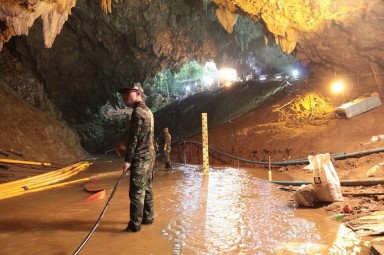 Yesterday the good news was confirmed: all of the 12 boys from a soccer team and their coach perilously trapped in a Thailand cave for 3 weeks had finally been rescued.

I, like so many others, had been breathlessly following the case of the young boys across the news the past few weeks.

When I first heard about the story the boys were still missing and unaccounted for, disappeared after going on a recreational adventure through the caves with their coach.

A few days later the missing were miraculously found. But it was not clear how or even if the young boys could be rescued.

The best case scenario was the adolescents would be forced to go on a harrowing dive through the complex tunnels that would scare even the most experienced Navy SEAL team. Worst case the 13 trapped might have to wait out the rainy season in Thailand and try to stay alive for a few months until the waters in the cave cleared out.

Incredibly though, all 13 trapped were rescued over the course of the past few days. Thousands of volunteers descended upon the scene to serve, to brainstorm, and to contribute whatever they could to rescue the lives of these brave young boys. Soldiers, divers, cooks, missionaries from all different countries came together to form a rescue superteam.

Humanity at its best.

The real beauty of it all is how no one seemed to question the mistakes these boys and their coach made by traversing this highly dangerous terrain.

No one blamed those who were trapped for their mistakes. No one questioned the worth of their lives, even after a rescue diver tragically died in the midst of preparing the escape route.

The countless volunteers just jumped right into the work and refused to stop until every possible attempt had been made to safely extract the lost.

As I watched the news unfold I could not help but see this entire story as a parallel to Jesus’ parable of the lost sheep.

In Luke 15:3-7 Jesus tells the story of a shepherd who leaves behind 99 sheep just to find one other who is lost.

There is no question in the shepherd’s mind of the value of this lost sheep.  There is no berating the sheep for its foolishness in getting lost. There is no doubt that he will do everything to rescue the animal.

The story is a parable for how far Jesus goes to rescue those who are lost and bring them home to Him, no matter how far gone they are.

When it comes to eternity we’ve all made mistakes far bigger in our lives and gotten lost far deeper than the Thai boys did.

Yet Jesus promises to pursue us with the same around-the-clock reckless abandon of the cave rescue mission. No matter what sort of mess we’ve gotten into with our lives He devotes every last one of His resources to rescue us and redeem us.

I thought of these parallels to Jesus’s teachings before the boys were saved, just reading about the rescue efforts in general. I prayed that all those involved would come out the other side safely. But even if they had not, the message displayed by the rescue efforts would have still told a beautiful story of mercy and grace.

Now with the boys’ rescue the message is amplified. Good news is celebrated.

Of course this good news will fade from the headlines as it always does. Within a few days most of us will have forgotten about all of this business with the boys in a cave (until the inevitable big budget movie is made of this tremendous story, naturally).

Everyone, that is, except for the 12 boys and their coach, their families, and those who risked their lives to rescue some overly adventurous kids they’d never met before.

For them this good news is etched into their timeline – a life-shifting event they will never forget.

And that I think ultimately is the message of the lost sheep story: for the Good News to truly make an impact it must be experienced individually.

For Good News to stay in the headlines, it must penetrate the heart. It must occur through a genuine connection and life event – one person at a time.

We must pursue the lost one by one, proclaiming the Good News to all who need to hear it, whether they deserve it or not. We must fight to bring it to those who are lost deep in the back of ragged caves, whose rescue seems impossible.

We must not judge the lost we are pursuing or question the mistakes they made. We must simply pursue them as Jesus would pursue us and as the Thai people pursued their young boys – seeing value in every individual life, working together despite our differences to do whatever it takes to mount a rescue effort, taking one step at a time into the darkness without losing hope and trusting in the Lord to bring the lost into the light.