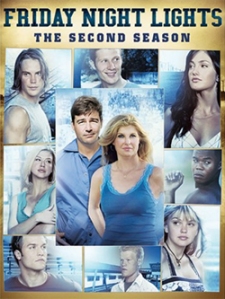 Friday Night Lights was a well-respected, Emmy Award Winning drama series that ran for 5 years on NBC. But you might have completely missed it.

During it’s original run it was bumped around the schedule and nearly cancelled multiple times. The show was always a critical darling, but mainstream audiences were slow to catch on.

It’s become one of those shows everyone tells you that you should go binge watch ASAP, like Breaking Bad or The Wire. And rightfully so.

Friday Night Lights is far more than a football show. It’s a realistic drama about a Texas High School coach and the down-to-earth problems his family and team face over the course of a career. It’s gritty, it’s funny, it’s relatable. It’s a pretty great show.

After the first season, NBC saw potential in the low-rated drama and gave it a renewal. Then the powers-that-be decided to spice things up, hoping to increase ratings for the fledgling show.

In doing so, the things people loved about Friday Night Lights were tossed by the wayside. Gone were the realistic problems and relatable characterizations. In were some ridiculous storylines about murder, Christian radio DJs, and other soap opera ridiculousness.

Watching through the series on Netflix, I was tempted to give up on Friday Night Lights during the second season. Thankfully, the season was shortened by the Writer’s Strike of 2007 and only lasts 15 episodes. So I plugged to see if anything got better.

Amazingly, something beautiful happens at the start of season 3 which completely redeems the show:

When Season 3 begins, Season 2 is completely forgotten about.

All of the characters move on as if the season never existed. The show doesn’t try to make up for the mistakes of Season 2. The writers just leave them behind and return to the task of creating the show they originally envisioned.

The final 3 seasons of the show are some of the highest quality hours of television produced in the past decade. No high school kids committing murder with a shovel. Just the true-to-life struggles of kids and coaches trying to find their places in the world.

If you decide the storylines you’ve written into your life are a mistake, why not do what Friday Night Lights did? Why not just drop them and never mention them again?

A lot of people think if they make a mistake they have to linger on it and dwell upon it the rest of their life.

But that’s basically akin to throwing up all over yourself and refusing to change your clothes or take a shower because you want to think about what you’ve done.

If you realize you’re doing something wrong you don’t always have to try to retroactively explain it or integrate it into your story.

That’s what Friday Night Lights gets right. What could happen if you let go of your mistakes for the next season of your life?

Are you holding onto a mistake that you would be better off forgetting about?